Background: Ovarian cancer is a malignancy with a complex immune suppressive microenvironment mediated by the recruitment or induction of cluster differentiation factor 4+ (CD4+) regulatory T cells. The purpose of this study was to assess the effect of neoadjuvant chemotherapy (NACT) on immune activation in stage IIIc/IV of High-Grade Serous Ovarian Carcinoma (HGSC), and its relationship to treatment response.

Patients and Methods: We retrospectively identified 33 patients diagnosed with HGSC and treated with neoadjuvant platinum-paclitaxel from 2005-2014. Pre- and post-neoadjuvant treatment tissue samples were submitted to immunohistochemical analyses with anti-CD3, CD4 and CD8 antibodies for the identification of tumor-infiltrating lymphocytes (TILs). The staining results were analyzed and were blindly evaluated with respect to clinical features. Pathological response classification to NACT was made according to Steffen Bohm.

Conclusion: The high number of tumor-infiltrating lymphocytes in post-surgery samples was significantly associated with higher rates of complete pathological response and better prognosis. It is convenient to carry out further and multicentric studies to validate these results.

Epithelial ovarian cancer (EOC) is the most lethal gynecological tumor. Ovarian cancer (OC) is the fifth most common type cause of cancer in women [1] and the fourth most common cause of cancer death in women [2].  High-grade serous carcinoma (HGSC) comprises approximately 70% of all EOC and accounts for the majority of deaths. HGSC is an aggressive neoplasms, presents in advanced stages (III-IV) and has a high frequency of TP53 mutations [3, 4]. This suggests that there may be other tumor microenvironment or host characteristics with a dominant role in survival.

To date, the standard therapy for advanced ovarian cancer is cytoreductive surgery or debulking surgery, followed by chemotherapy with the combination of carboplatin (area under the curve (AUC), 5.0-7.5) and paclitaxel 175 mg/m2 every 3 weeks, for 6 cycles)[5] or three cycles of platinum-based neoadjuvant (NACT), followed by interval debulking surgery, and then at least three more cycles of platinum-based chemotherapy[6].

In recent years, there has been interest in understanding the role of immune response. Ovarian cancer is an immune reactive malignancy with a complex immune suppressive network that blunts successful immune eradication. This suppressive microenvironment may be mediated by recruitment or induction of CD4+ regulatory T cell (Tregs)[7].

A number of studies have demonstrated that the presence of tumor-infiltrating lymphocytes (TIL) in surgically resected tumor tissue correlates with a favorable prognosis, especially in HGSC. Landmark study by Coukos et al. , retrospective analysis of 186 stage III-IV EOC patients revealed that the 5-year overall survival (OS) rate was 38% for patients with CD3+ TIL-positive tumors, compared with only 4.5% for CD3+ TIL-negative tumors[8,9]. Other studies revealed that the CD8+ subset of TIL correlates more strongly with survival [10—13].

The expression of PD-L1 in a range of malignancies including renal, esophageal and colorectal cancers, suggesting that some tumors have evolved high levels of expression of this molecule, possibly suppressing anti-tumor T cell responses[16,17]. As a result, PD-L1 offers potential as a prognostic marker as well as being a target for therapy.

Hamanishi et al. studied expression of PD-L1 and PD-L2 on ovarian tumors of different grades and found a significantly worse overall survival in patients whose tumor expressed one or both of these ligands. They also showed an inverse correlation between PD-L1 expression and intraepithelial CD8 count, a known prognostic marker[18-20].

The discovery of the importance of the immune system in the development of cancer can help us in the determination of new diagnostic and prognostic parameters and the possibility of using serum markers instead of biopsies. This evades the possibility of non-representative biopsies, intermetastases-heterogeneity and might be able to avoid invasive diagnostic techniques[21,22].

The purpose of this study was to assess the variation of neoadjuvant chemotherapy on tumor-infiltrating lymphocytes expression in stage IIIc/IV of high-grade serous ovarian carcinoma, and prognostic value.

The person directing the project identified those patients whose diagnosis was proven to be HGSC, stage III-IV (FIGO), underwent primary debulking surgery (PDS) and post-chemotherapy residual disease and requested them to participate in the study.

The study design will be Descriptive Observational: Population - correlational (relationship between CD3+, CD4+, and CD8+ T Cells on the tumor tissue obtained from a diagnostic laparoscopy or diagnostic core biopsy and post-chemotherapy residual disease in HGSC. Patients were treated at Hospital 12 de Octubre (Madrid-Spain) between 2005 and 2014.

The selected tumor samples, formalin-fixed paraffin-embedded tissue (FFPE), were retrieved from the archive of the Hospital 12 de Octubre -Pathology Department. The cases were selected based on the histological type, stage and follow-up.

The study was approved by the ethical committee of our institution. All patients included in the study gave written informed consent for research use of tissue specimens.

Pre-treatment omental or peritoneal biopsies were obtained at diagnostic laparoscopy or diagnostic core biopsy. Sections of 4-um thickness were mounted on glass slides. Blocks of omentum removed at interval debulking surgery (IDS) after NACT, were reviewed by a pathologist according to the Recommendations from the International Collaboration on Cancer Reporting (ICCR guidelines). Sections of samples that representing the area of the tumor with worst response were selected.

Omental biopsies were collected in the operating room from untreated patients undergoing PDS or diagnostic laparoscopy and from patients undergoing IDS after NACT and fresh-frozen samples were histologically matched to FFPE specimens of the same patient by hematoxylin and eosin review.

The staining results were analyzed by one pathologist and were blindly evaluated with respect to clinical features. The slides were scored as positive for strong and weak staining intensity, negative in the absence of staining or not applicable (NA) to indicate insufficient material for analysis.

Mann-Whithney tests were done to compare the percentage of infiltrated lymphocytes between the sample before and the sample after chemotherapy. Analyses were done using GraphPad Prism. We make response prediction models with infiltration percentages but no significant results have been obtained.

Values of CD3+, CD4+ and CD8+ TL as general predictors of pathological response (pCR) were performed using an ROC curve and the confidence interval (95% CI) of the area under the curve; in the case that was significant an approximate cutoff point was made.

The risk estimate for complete pathological response of TILs was calculated using the Odds-ratio (OR) and for the overall survival (OS), the estimated Hazard Ratios (HR) with their 95% CIs were estimated. In all cases a type I error of 0.05% is considered.

We retrospectively identified 33 patients diagnosed with HGSC and treated with neoadjuvant platinum-paclitaxel from 2005 – 2014. 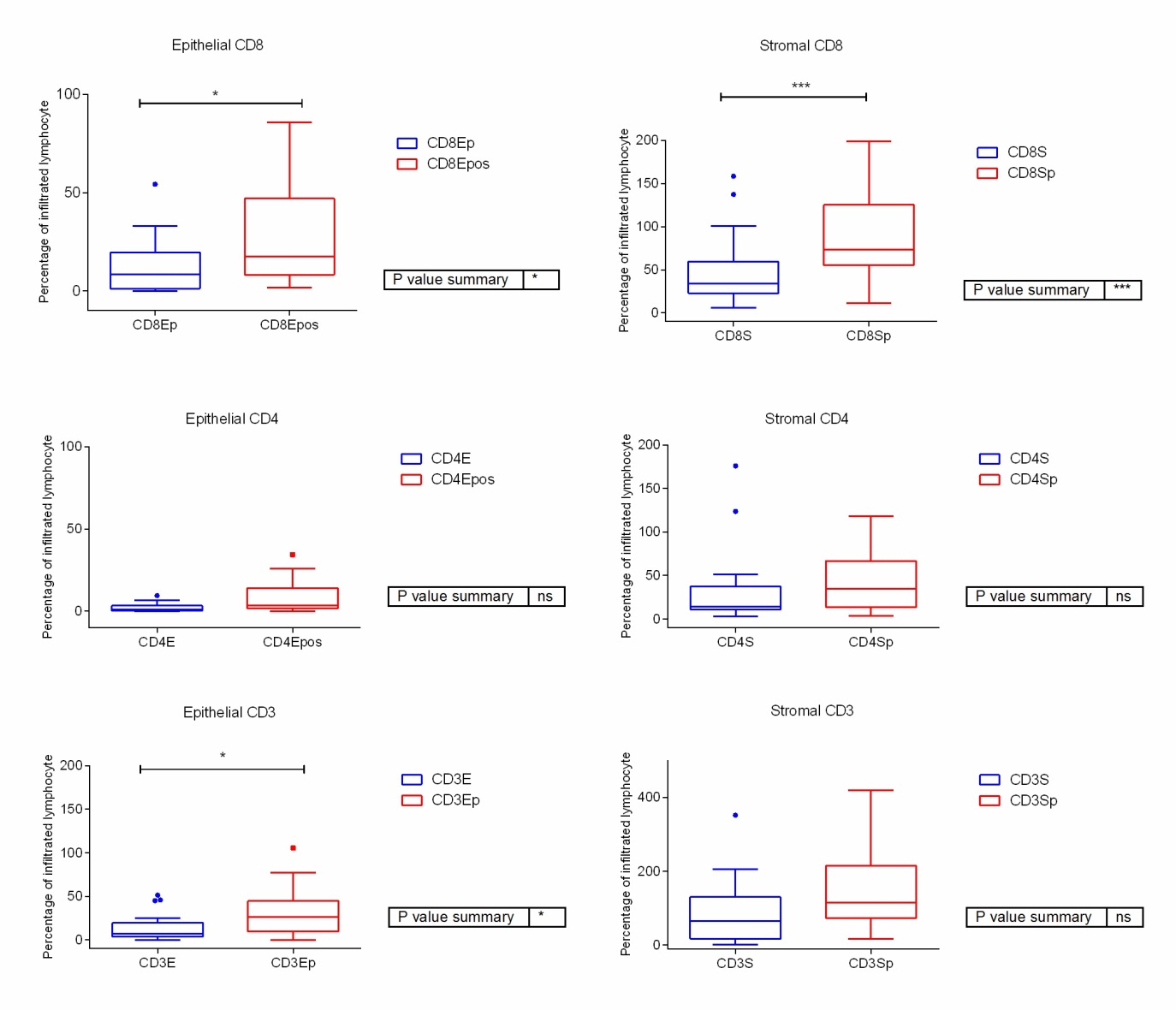 Figure 4: Percentage of lymphocyte infiltration in the pre and the post chemotherapy samples. (p= sample after neoadjuvant treatment)

The tumor biology, inflammatory cells, including lymphocytes, extracellular matrix and a rich cytokine environment contribute in concert to a microenvironment, that fosters inflammation, which paradoxically drives tumor growth, angiogenesis and promotes tumor infiltration and metastasis, while simultaneously inhibiting anti-tumor immunity.

We demonstrate that the effect of NACT on a human metastatic tumor microenvironment induces activation of CD3+ T cells, CD4+ T cells and CD8+ T cells. Importantly, even those patients who had a poor response to three cycles of platinum-based chemotherapy had a high number of CD8+ T cells. Our findings are supported by a previous study reporting an association of CD8+ T cells and tumor eradication and concurrent activation CD4+ T cells is required to support potent cytotoxic T lymphocytes[26-31]. A high number of tumor infiltrating cytotoxic T lymphocytes was associated with a better overall survival, presumably due to the stronger effect in non-optimally debulked patients[32].

Despite the existence of controversial published data, the results are in favor of the fact that the increase in the T lymphocyte population is associated with greater survival.

The impact of intraepithelial CD3+ or CD8+ T cells was confirmed by multiple independent studies on ethnically and geographically diverse populations. Intraepithelial T cells were more prevalent in tumors with increased proliferation, indicating that the improved outcome is not due to indolent tumor cell behavior [33].

The low neoantigen load, HR-proficient tumors exhibited significantly lower numbers of CD3+ and CD8+ TILs, as well as lower expression of the inhibitory immune checkpoint modulators, PD-1 and PD-L1, compared to BRCA1/2-mutated tumors. This observation is consistent with the hypothesis that an elevated neoantigen load leads to an increased number of TILs that are counterbalanced by overexpression of immune checkpoint modulators [34].

The relative contribution of platinum versus taxane to the immunostimulatory effects seen in our study is an open question because nearly all patients received the combination therapy. Experimental studies suggest that cisplatin does not induce immunogenic cell death (ICD) but carboplatin and docetaxel produce partial features of ICD. Chemotherapy can also activate the host immune system by several other mechanisms such as increased presentation of neoantigens. The association of antitumor immune response (intraepithelial T cells) with prolonged survival, and viceversa the association of immune escape mechanisms with poor survival, suggest that ovarian cancers are intrinsically immunogenic [35].

The presence or absence of T cells in solid tumors is a key limiting factor for cancer immunotherapy [23] and the presence of CD8+ T cells at the invasive margin was predictive of response.

The high number of tumor-infiltrating lymphocytes in post-surgery samples was significantly associated with higher rates of complete pathological response and better prognosis. So, the incorporation of immunotherapies to postchemotherapy treatment options could be of benefit for prolonged disease control in patients with advanced HGSC. It is convenient to carry out further and multicentric studies to validate these results.

Copyright: ©2019 Rojas K, et al. This is an open-access article distributed under the terms of the Creative Commons Attribution License, which permits unrestricted use, distribution, and reproduction in any medium, provided the original author and source are credited.