Abstract Renal lymphoma rarely seen as a primary neoplasm of the kidney, it is often seen as a part of multisystem disseminated extranodal lymphoma, or as a tumor recurrence, also may be seen in immunocompromised patients. We report a case of an 80-year-old lady with primary renal lymphoma (PRL).

An 80-year-old female with a long-standing history of hypertension. She had a new onset of bilateral dull aching flank pain, fatigue, and hematuria. CBC and kidney function were within normal limits. Ultrasound revealed enlarged left kidney and to a lesser extent right kidney with bilateral hypoechoic ill-defined infiltrating masses indistinct from the renal parenchyma with retroperitoneal extension. The patient was referred for CECT as a superior modality for more precise details regarding the extension of the mass. CT show sizable indistinct mass encasing and infiltrating the left renal parenchyma and to a lesser degree the right renal one in the non-contrast study with minimal contrast uptake after contrast injection, the left measures 10.5 cm × 8.8 cm in two dimensions (Figure 1). The mass extends to the perinephric space (Figure 2), and molds with the retroperitoneal lymph nodes to encase with no significant invasion or compression (sand witching), all major vessels in the retroperitoneal space; including the aorta, IVC, renal vessels, celiac trunk above and iliac arteries below (Figures 3 and 4). Also, both ureters were encased with bilateral mild hydronephrosis, the epicenter of the mass was outside the collecting system (Figure 5). 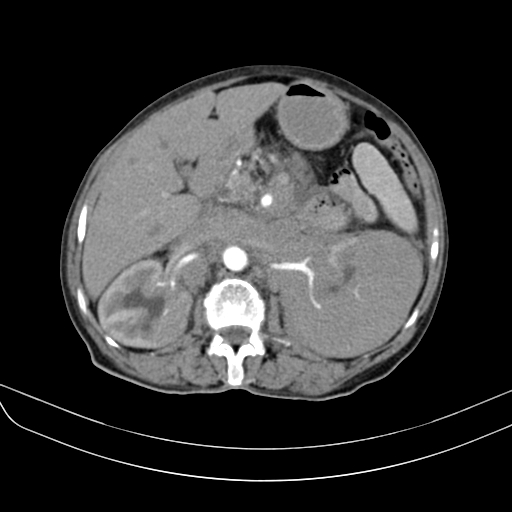 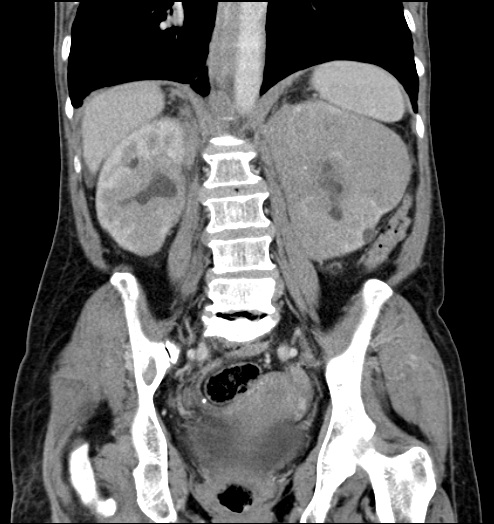 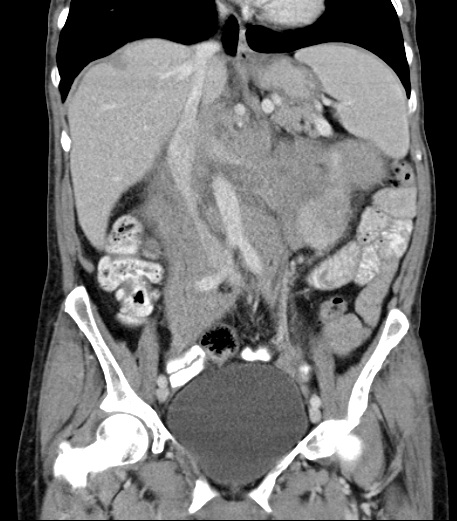 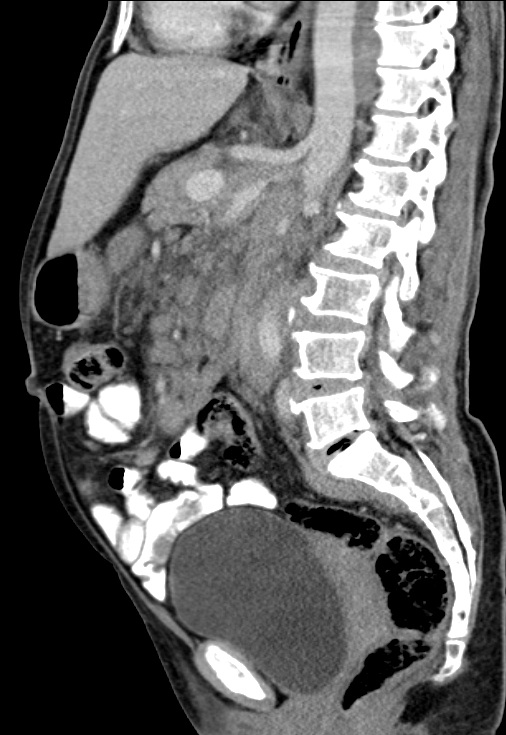 Figure 4: Sagittal MPR CECT shows retroperitoneal molding of the lesion encasing the aorta and its branches; SMA and coeliac trunk. 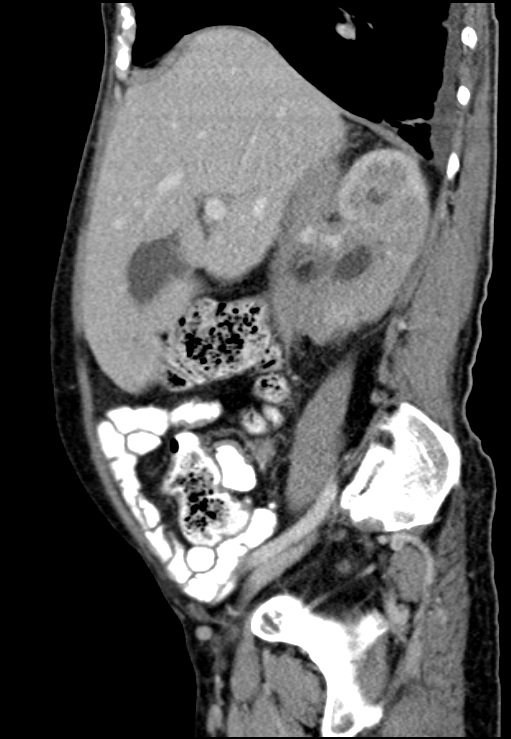 The patient was referred to the Interventional Radiology unit for percutaneous core biopsy; the patient INR was within normal limits, an US-Guided core biopsy was done with a BRAD semiautomatic gun G16 × 15 cm and 2 samples were biopsied from the left renal mass, for further histopathological correlation, which confirmed PRL.

Primary renal lymphomas (PRLs) is exceedingly rare [1-3], due to the fact that the kidneys, like the brain, lack lymphoid tissue which led many to question if it truly exists [4]. Multiple theories about its true origin, suggesting the renal capsule or the perinephric fat (being rich in lymphatic) hence it spreads to the renal parenchymal tissue [5], others postulated that it occurs due to chronic inflammatory process [6]. What is known and should be emphasized to diagnosis (PRLs) that it does not arise as an invasion from regional lymph nodes or associated with any other organs involvement as in secondary renal lymphoma (SRL) which is more common. PRLs account less than 1% of extranodal lymphomas [1-3]. It can be bilateral in 10% to 20% of cases. It is more common in NHL of B-cell type [7].  Clinical presentation is non-specific, fatigue, weight loss, flank pain, hematuria, proteinuria, and rarely acute renal failure form lymphomatous infiltration [8].

PRLs should be differentiated from renal cell carcinoma (RCC) in order to determine the method of treatment and to suggest a renal biopsy to avoid unnecessary nephrectomy [5].

Being rare, few studies have described the imaging patterns of PRLs. Sporadic case studies and series from oncologic and urologic literature stated that PRLs may present similarly to SRL as focal masses (single or multiple); bilateral diffuse enlarged kidneys, or more often as large, ill-defined, infiltrative lesions engulfing the kidneys [8].

One major finding may help discriminate PRLs from RCC is that despite being aggressive it rarely involves the IVC, also the epicenter of the tumor being outside the collecting system help to differentiate it from urothelial carcinoma [9].

It is critical to differentiate by imaging RCC from Renal lymphoma, whether PRL or SRL, for proper management and to avoid unnecessary surgery. Nephrectomy is the treatment of choice for RCC while chemotherapy is for renal lymphoma.

It is critical to differentiate by imaging RCC from Renal lymphoma, whether PRL or SRL, for proper management and to avoid unnecessary surgery. Nephrectomy is the treatment of choice for RCC while chemotherapy is for renal lymphoma.  Authors’ contributions

Authors do not have any disclosures.

Did the author obtain written informed consent from the patient for submission of this manuscript for publication? Yes.

Ethical standards followed the responsible committee on human experimentation (institutional and national) and with the Helsinki Declaration of 1975, as revised in 2000 (5).

Copyright: ©2018 Alagha M, et al. This is an open-access article distributed under the terms of the Creative Commons Attribution License, which permits unrestricted use, distribution and reproduction in any medium provided the original author and source are credited.